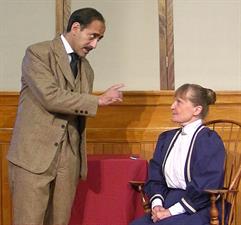 This is a fully staged Actor's Equity production that will be available on ELTC's YouTube Channel, https://www.tinyurl.com/ELTCYouTube, after it has been filmed and edited.

Tickets: $15.00 and may be purchased at tinyurl.com/bierce-tix
Before the filmed play is ready, only the opening date is listed for ticket purchasing, but all other dates will be added after NOTHING MATTERS has been uploaded to YouTube, and we have the specific YouTube url for this play.  We hope to have the play uploaded by October 10 at the latest.  When purchasing tickets, the specific YouTube url will appear on your ticket for the specific performance. For those who purchased tickets on opening night before the play has been uploaded, the YouTube url will be sent to you via e-mail.

The setting is Ambrose Bierce's apartment in Washington D.C. in 1898.  A poet merely asks his advice about poetry, and receives an insight into the Civil War, journalism, and politics. Bierce's philosophy can be summed up in two words: "Nothing Matters."  But of course, many things mattered to him very much.  As a journalist, he was known for getting at the truth, no matter who was harmed, and many scholars believe he wrote one of the best short stories ever written, "An Occurrence at Owl Creek Bridge."

East Lynne Theater Company premiered NOTHING MATTERS in 2000 starring J. M. McDonough and Patti Chambers, before playwright/performer Dave Geible took it on the road with The Wyoming Shakespeare Company.  Dave has now visited the script again with director Gayle Stahlhuth, with James Rana now taking on the role of Bierce.


James Rana, actor/playwright, has performed with theaters throughout the country, including ELTC, and in film and television. In 2017, he performed in Off-Broadway's THE GOVERNMENT INSPECTOR
starring Michael Urie. In the fall of 2017, he began rehearsals for Broadway’s THE BAND’S VISIT, and performed several times in the role of the Band's Leader, originally performed by Tony Shalhoub, and other roles.  When this Tony Award winning show closed on Broadway in April 2018, he began performing in The National Tour.

Gayle Stahlhuth has performed Off-Broadway, in regional theaters, and in film and television.  Since 1999 she has been Artistic Director of ELTC, producing over 100 different plays and musicals for this company, and directed most of them. Her work has been praised in “The New York Times,” “The Wall Street Journal,” and “The Philadelphia Inquirer.”  It took her three months (and around 50 hours) to negotiate a contract with Actors’ Equity Association so that NOTHING MATTERS could be produced during a pandemic.

This is a fully staged Actor's Equity production that will be available on ELTC's YouTube Channel, https://www.tinyurl.com/ELTCYouTube, after it has been filmed and edited.