September 15 through October 16: Wednesdays through Saturdays at 8:00 PM 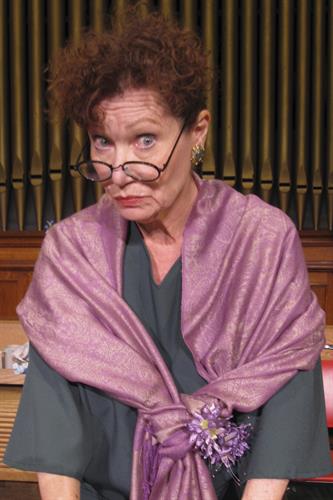 “A Telephone Call," written by Dorothy Parker, is about a woman who waits anxiously for a man to call.  She counts to five hundred by fives, seeks God's help, and wishes the man were dead, only to change her mind.  "After all," she says, "it's silly to go wishing people were dead just because they don't call you up the minute they said they would.  Maybe the clock's fast."
Dorothy Parker (1893-1967) was a poet, journalist, critic, screenwriter, human rights activist and philanthropist. She was called a wit, a wise-cracker, and a nut. But above all, she was a Certain Woman. A collection of her work, “The Portable Dorothy Parker,” has never been out of print.
From September 15 to October 16, Wednesdays through Saturdays at 8:00 PM, the Equity professional East Lynne Theater Company presents "Dorothy Parker: A Certain Woman," starring Suzanne Dawson performing in a world premiere created by James Rana, based on the life and works of one of "The New Yorker's" most popular writers. It is directed by ELTC’s artistic director, Gayle Stahlhuth.
Suzanne Dawson’s off-Broadway productions include “CBS Live” and “The Great American Backstage Musical.” Her regional credits include “Sylvia” at Florida Studio Theatre and “Rumors” at Paper Mill Playhouse in NJ. She toured with “Rumors,” and opposite Gavin Macleod in “Last of the Red Hot Lovers.” ?In 2011, Dawson first performed “A Telephone Call” in ELTC's “The World of Dorothy Parker,” created by Stahlhuth. Other ELTC productions include “Berkeley Square,” “The Legend of Sleepy Hollow,” adapted by James Rana, and recently, “Arsenic and Old Lace.”
This summer, Rana has been entertaining all ages in Cape May by juggling and making balloon animals at local festivals, the farmers market, and National Kid’s Night Out. Over the years, he’s appeared in several ELTC productions including “Dracula” and “Strictly Dishonorable” and works he’s written for the company include “A Year in the Trenches” that was commissioned by The New Jersey Historical Society.  He was in "The Band's Visit" on Broadway, and will be returning to the National Tour of the same production, this fall.
Gayle Stahlhuth has performed Off-Broadway, in regional theaters, and in film and television.  Since 1999 she has been Artistic Director of ELTC, producing over 100 different plays and musicals for this company, and directed most of them.
Dorothy Parker recently made the news when her gravestone was unveiled before many fans on August 23, 2021 in Woodlawn Cemetery in The Bronx. Due to the efforts of the Dorothy Parker Society, her ashes were moved from the NAACP headquarters in Baltimore, to the Bronx where she is now next to her parents and grandparents. On the gravestone is the final stanza of her 1925 poem "Epitaph for a Darling Lady:" It reads: "Leave for her a red young rose. Go your way, and save your pity. She is happy, for she knows That her dust is very pretty."
The location for “Dorothy Parker: A Certain Woman” is The Cape May Presbyterian Church, 500 Hughes Street, where ELTC is in residence. Tickets are $35; $30 senior; $20 student/military. Visit Eastlynnetheater.org, under "Mainstage Season" for more information; under "News" for the COVID-19 Safety Protocol, or call 609-884-5898.